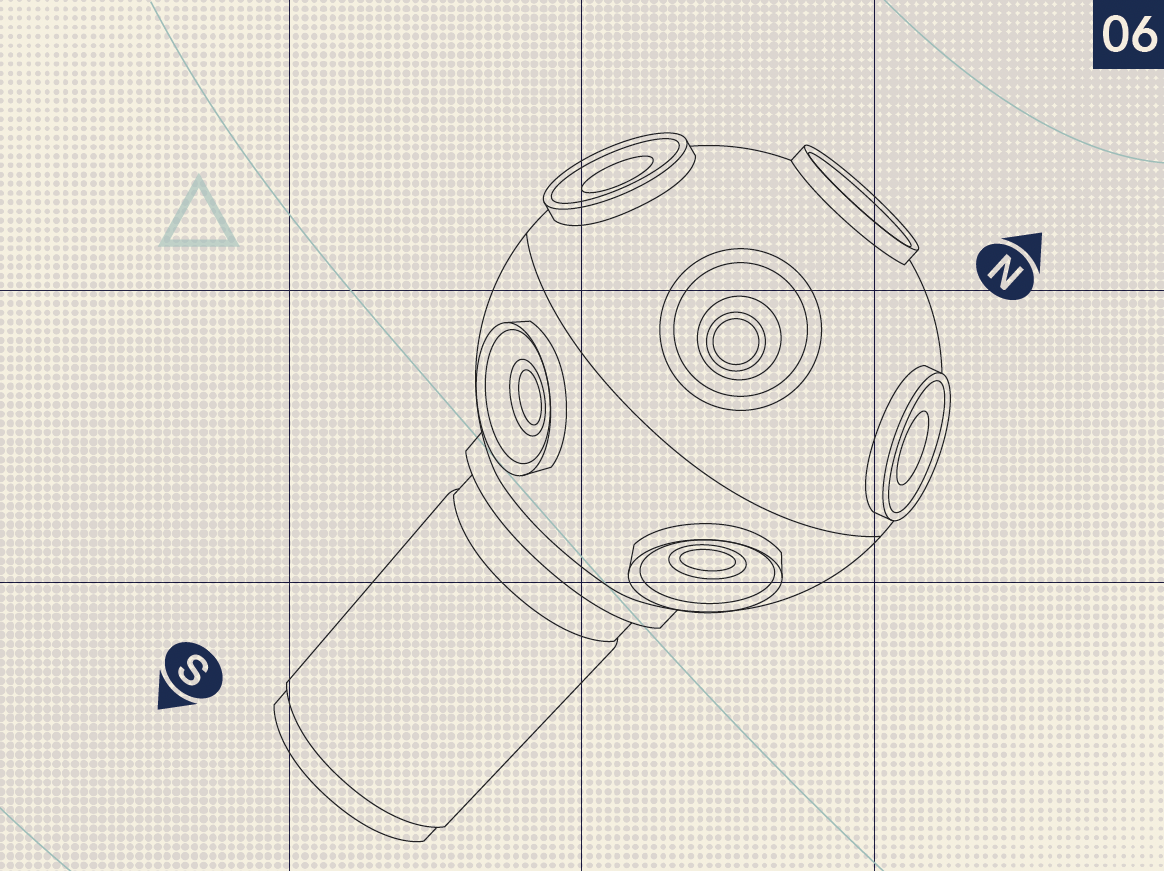 When the pandemic began, I tried to see the lockdown as an opportunity to really get to know my physical surroundings. On my daily walks, I tried to familiarise myself with the details I normally missed: a crooked lamppost, a paw print stamped into once wet concrete, a graffitied street sign with an ‘e’ crossed out reading Batman not Bateman. But as the months drew on, I started to feel overwhelmed by this perpetual familiarity. Having exhausted every possible route, I craved novelty from my walks. To fulfil my desires, I began to go for walks on Google Street View.

I walked around many places. Some nostalgic and deeply bound up with my childhood: the streets outside my primary school, my grandparents’ driveway. By dragging myself along with white arrows, I could revisit all the places that had ever meant something to me. I went to the street corner where I had my first kiss as a teenager. I searched my brother’s address in America, hoping that if I couldn’t see him in person for the months to come, I might at least catch him outside his home on Street View.

I also went to places I’d never seen before: I went to Times Square in New York and stared up at the enormous billboards, dodging tourists and taxis; I went to Rio de Janeiro and stood beneath the Cristo Redentor statue looking out across the city and the surrounding bay. I took the path up Ben Nevis surrounded by views of the Scottish Highlands.

All during my walks on Google Street View though, my underlying sentiment remained at best skepticism, at worst cynicism. The questions never far from the surface: How did Google capture these images in such detail? What could these images be used for? Where are the boundaries for consent? Privacy? Ultimately my fascination and escapism were interlaced with distrust and concern for the wider ramifications of the data; vast quantities of high-definition photographic images available online, accessible to internet-users at no cost…to what end?  What if I don’t want my data captured?

The distrust partially stems from this: I know each image only exists because Google, by necessity, had been physically present at that location at some point in time. Each image cries out: Google was here. Renowned French film theorist and critic André Bazin wrote: ‘The photographic image is the object itself […] it is the model.’ In other words, the fundamental logic that underpins the photographic medium: photographs depend on physical co-presence. By way of an image sensor or photographic film, the camera records light to capture the material reality in front of the lens. I type in my street name. And immediately, I wonder when Google was there.

The vehicles that Google has developed to capture Street View have become more robotic and dystopian over the years. In the early days, Google simply strapped a camera to the roof of CEO Larry Page’s car and set off to photograph the streets in the San Francisco Bay. Since then, they’ve become far more sophisticated: they have engineered a sphere that towers four feet above the roof of a car with fifteen lenses embedded into it that are able to capture every angle. But images are not the only form of data that Google Street View cars gather. They have also been fitted with GPS technologies and lasers to capture wind velocity or distance information for 3D-imaging. The intention simply being: gather as much data as possible.

To break it down, the process behind each panoramic image on Street View is something like this: Google sends its fleet of cars to drive across the world and capture images that are then stored on hard-drives. Once full, the drivers post the hard-drives to Google HQ. Software blurs faces and licence plates, detects and extracts bits of information from objects like street signs and stitches the images together to form street-level panoramas. Each 360-degree view has been composed of 15 photographs; one from each lens of the rosette-like camera.

Of course, there are parts of the world inaccessible to cars. For a while, this meant inaccessible to Google. But then, they created a ‘Lite’ version: Google Street View Trekker that is a waterproof camera with space for spare batteries so that operators can go out for 6 to 8 hours at a time with the Trekker. It can be attached to boats, ziplines, snowmobiles: crafted to access anywhere on the planet. With the Trekker, Google can extend its eye-level photographic reach: zip lines through the Amazon; conservation trips to the Arctic; 3,000 feet up El Capitan in Yosemite National Park; the canals of Venice.

And so, bit-by-bit, Google sets out to photograph the world to document every corner. The quantities of data they have already are vast. To put it into numbers: so far Google’s Street View trekkers and cars have collected more than 170 billion images from 10 million miles across the globe. I get vertigo from those figures, dizzying in their scale. And reading these numbers, the question on my mind remains: But, Why?

It is impossible to forget that cartography has long been linked to power. Cartographers were important figures in the expansion of empires from the long sixteenth century onwards: map-makers as agents of Empire. Each colonial power, in its ‘discovery’ and ‘exploration’ of the world, translated the nation’s power over a territory into a visual grammar to convey to the imperial centre. The proliferation of cartography in the British Empire is inextricably linked to its efforts in colonial domination.

Maps hold a great degree of objective authority: they claim to tell us the lay of the land in all its truth. A birds-eye view that sets out to declare a territory’s wholeness. It is rational, objective, scientific. But really, the map is only one way among many of reading the world. Indeed, in Imagined Communities, Benedict Anderson identifies the map as one of three central “nation-building” artifacts – along with the census and the museum – of rallying nationalism for the colonial state.

Though Google’s influence disregards the nation-state and national borders, its mapping projects serve to underline the power of this global techno-corporation. Just as maps enabled imperial powers to visually convey their control to its subjects, so too does Google Maps provide Google with a visual grammar for its digital capitalist expansion; Google Maps as a technocolonial cartography.

In his short story On Exactitude in Science, Argentine writer Jorge Luis Borges fabricates a tale in which the empire orders its cartographers to create a map that is so detailed that it ends up covering and swallowing the entire territory it sought to represent. We might imagine a contemporary articulation of Borges’ story adapted for Street View: a photographic archive of the world that is so extensive that at some point, storing the data gathered by Google might require such large storage facilities, that they begin to overtake the physical territory in the images themselves.

By going for walks on Google Street View though, it soon becomes clear that Google can never have full control over the images created. No matter how carefully crafted, how thoughtfully engineered, machines will always glitch. There is no way to completely remove the chance of error. The software Google uses to stitch the images together can never be fully reliable. And so, every now and then, we stumble across distortions. The images we weren’t meant to see. A pair of trainers and ankles without a body. An outstretched arm emerging from the pavement. A pixelated fuzz. A road fragmented into seven segments.

Google has also had to hand over its control to circumstance. The impossible predictability of being in the same place at the same time. Whatever the objective reality of the physical surroundings at the split-second in time when Street View’s car happens to pass along a street, is frozen into the panoramic image. The images we see on Street View are devoid of the human photographer’s agency. Instead, the decisions are delegated entirely to the automated camera, the shutter intervals already pre-programmed.

What the media flâneur experiences on Street View then, is perhaps in some ways closer to the experience of walking through the real city than any other photographic medium. Any other street photography contains within it the decisions and agenda of the photographer to capture this scene at that moment, isolating it from the remaining 360-degree reality available to the photographer.

And so, on Street View, it can feel as if we have been exposed and subjected to an unfiltered reality. The experiential city of Walter Benjamin or Charles Baudelaire’s Paris. The fleeting moments. It is this aspect of Google Street View that fascinates artist and curator Jon Rafman. In his essay, The Nine Eyes of Google Street View, he writes: ‘The world captured by Google appears to be more truthful and more transparent because of the weight accorded to external reality, the perception of a neutral, unbiased recording, and even the vastness of the project.’

In 2008, Rafman began to collect screenshots of Google Street View and created an archive of images that act as a conceptual meditation on the state of photography in a time of automated image-making. Among the screenshots in his archive are images from Street View of a garage on fire, police making an arrest, a full rainbow, a couple kissing, a horse staring straight into the camera, a child doing a handstand.

Some of the images in his archive are haunting too. There is one image of a woman at the beach, staring out to sea as if yearning, in a way that is deeply mesmerizing. In feeling, it is very much like the melancholy of German Romantic painter Caspar David Friedrich’s Wanderer über dem Nebelmeer (1818). Indeed, there are several accounts circulating online of relatives who have found their loved ones on Street View long after they have passed away, their living presence digitally preserved.

Artist and lecturer Lisa Selby recounts finding her mother Helen on the steps of Greenwich library after she had passed away from cancer. Selby, who is behind the Instagram page @bluebaglife that documents first-hand stories of addiction and prison, was mostly raised by her grandparents as her mother was an addict and largely absent from her life. As a way of coming to terms with this loss of motherhood, Selby would spend hours searching the streets of Greenwich on Street View looking for her mother.

Of the moment when she eventually found her, Selby says: ‘I was so excited […]. My heart was racing fast. I was zooming in as much as I could. It was like seeing a ghost.’ Though Selby has not revisited the image since that evening, knowing her mother is there on the steps of the library there gives her comfort: ‘it’s like a time machine that I can revisit her again when I want to see her.’

And so, Google Street View presents the media flâneur with a range of experiences and feelings that culturally we are still coming to terms with. Going for walks on Street View is a bizarre experience that can evoke fascination, fear, loss, humour or grief. Whatever the sensations though, underlying it all is the enormous power that Google continues to accrue from our lives.