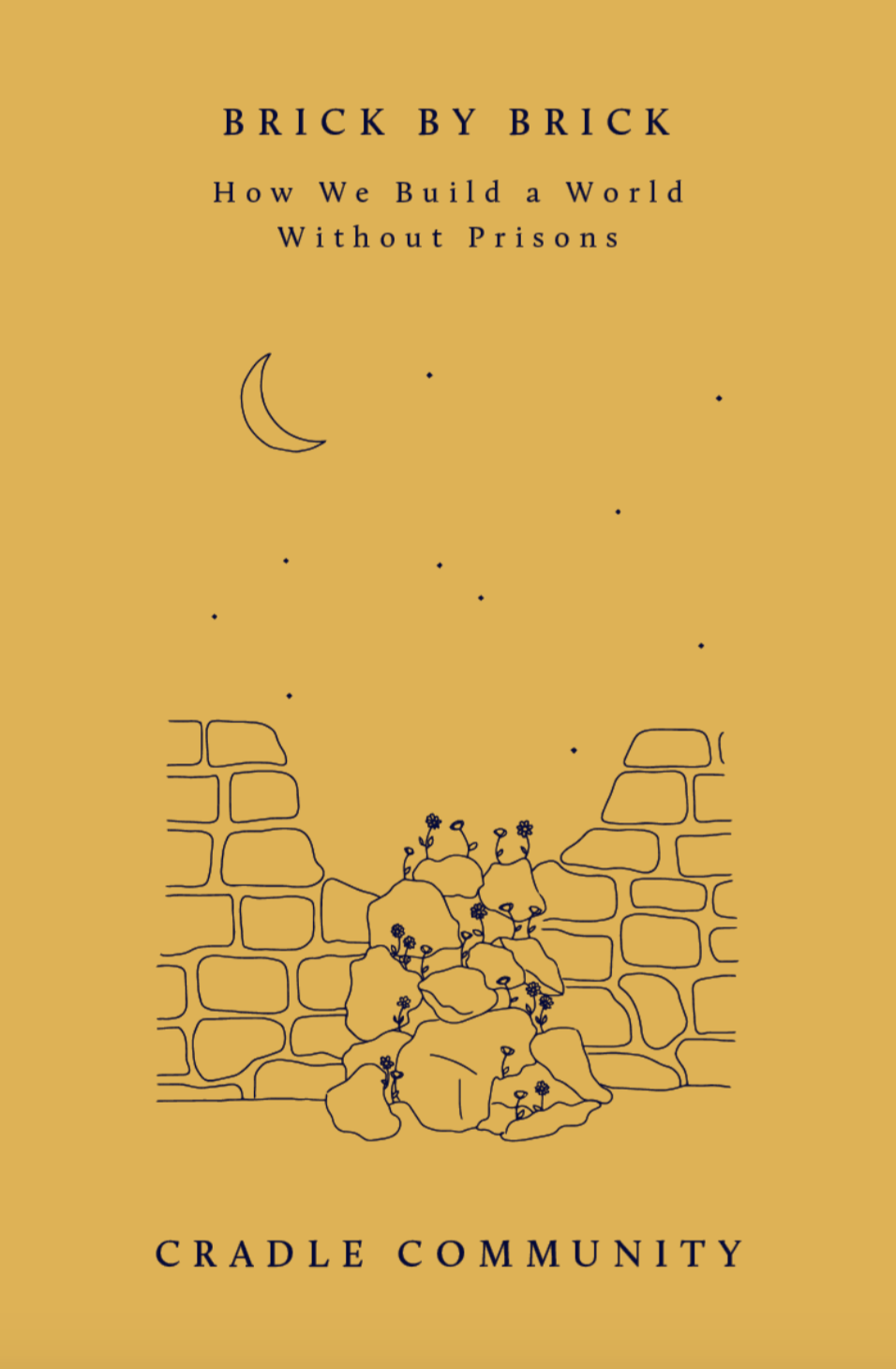 Brick by Brick: How We Build a World Without Prisons outlines an urgent and inspiring vision for a society that places care and compassion at its core. In their first book, abolitionist collective Cradle Community analyses with determination and clarity the pervasive reach of the UK’s prison system, exposing the violent ripple effects onto all corners of marginalised communities’ lives. What makes the book so powerful is how accessible and energising it is, providing readers with a tangible path for building a caring world one brick at a time.

Emerging from Cradle Community’s extensive experience campaigning for prison abolition and transformative justice, Brick by Brick is a vital read for UK abolitionists – whether already familiar with abolition as a methodology or more broadly anyone impacted by state violence. Brought together by their commitment to radical approaches to collective care, Cradle is a group of individuals who combine their experience as educators, facilitators, and artists to deliver workshops on community accountability, transformative justice and abolition.

Published in the closing months of 2021, Brick by Brick is one of the first six books to be published by independent political publisher Hajar Press whose core values of imagination, creativity and compassion have so much in common with Cradle Community. Founded by Brekhna Aftab and Farhaana Arefin, Hajar press is a publishing house run by and for people of colour. In firm resistance to the infrastructural racism of mainstream publishing, Hajar’s mission is to, ‘give space to those whose imaginations are not bound up with the status quo, to create for ourselves’. The writing Hajar has published already in their short life has been transformative, beautiful and revolutionary. In 2021, alongside Cradle Community, Hajar also published writers Lola Olufemi, Sarah Lasoye, Jamal Mehmood, Heba Hayek and Yara Hawari. Writers upcoming in 2022 include Gargi Bhattacharyya, Mohamed Tonsy, Pear Nuallak and Zena Agha. Aftab and Arefin say: ‘We are political in that we don’t take a ‘neutral’ stance on issues like Palestine, abolition, capitalism, etc. We ask our writers, ‘What would you want to write if you could write anything you wanted?’’

In their first book, Cradle Community exposes the ways the state aims to embed itself into all aspects of community life – from housing, to borders, to food, to education, to healthcare. For Cradle, the prison exists far beyond its walls. As Ruth Wilson Gilmore makes clear, ‘Abolition requires that we change one thing: everything.’ Cradle’s book interrogates the assumptions that underpin the state’s understandings of ‘crime’, ‘violence’, ‘safety’ and ‘care’, showing how these terms are deliberately weaponised to target racialised, queer and disabled communities. Cradle exposes the violence experienced time and again by marginalised people when coming into contact with the state. They write: ‘Prisons aren’t eliminating crime – they’re disappearing vulnerable people.’ And provide readers with the tools to name and dismantle systems of punishment.

At the same time, Brick by Brick is also deeply generative, showing that abolition is about creating and building. Cradle writes:

Our collective is dedicated to building: building radical spaces; building our expertise in intervening in and de-escalating violence; building frameworks to reimagine how we understand health and wellbeing; building strong bases of support and care for survivors; and building new approaches to accountability in our work with people who have caused serious harm.

The book is as much about tearing down the bricks of current structures of violence as it is about building new structures that really centre care for everyone. Cradle outlines the work that is already being done by grassroots organisations to resist and rebuild. They bring in the voices of friends and mentors in the UK context as well as internationally in the Global South to honour abolitionist struggles for: land justice and reparations; food justice practices that enable communities to provide nourishment for themselves; disability justice; trans liberation; mental health support that does not pathologise or criminalise; abolitionist responses to sexual violence; and resistance to borders and nationalisms. They show that struggles for liberation are all inter-connected.

Despite offering such an extensive mapping of the matrixes of oppression, Brick by Brick is beautifully accessible. The book is powerful in its capacity to disentangle complex latices of power, presenting them one brick at a time to readers in a way that enables them to continue the project of dismantling beyond the pages of the book. The book is Cradle’s ‘offering to others who are trying to build an alternative to the violence of the British police and prison system. It is for those who feel the acute tightness of disempowerment in their chest but who want to fight – to take action from the UK as part of the global abolitionist project.’

Very importantly, in the final section of the book, Cradles offers guidance for ways to respond to harm that do not fall into carceral logics of punishment. They lay out the steps and processes that readers can begin to apply to their daily lives to practice abolitionist anti-violence. This section is particularly energising, because it sets out in practice ways of navigating necessarily complicated and messy questions. It is a toolkit for communities to enact caring responses to one another, even in the face of harm – ways of learning and unlearning, trying, making mistakes, trying again, and ways of holding ourselves and each other accountable meaningfully. Cradle’s steps toward abolition are inspiring and irresistible.

In light of the current crisis of higher education in the UK, in which university management teams consistently show their disregard for student and staff wellbeing, Brick by Brick is an urgent read for the context of rethinking transformative educational spaces. Cradle’s guidance is vital for creating learning environments that really are based on community, care, and growth rather than what the university sells us. For anyone grappling with ways of imagining and re-building the university, Brick by Brick is an urgent call to imagination, and more importantly, to practice.

Next Article in Issue >